Home » Our Products » 3D GIS in the Cloud 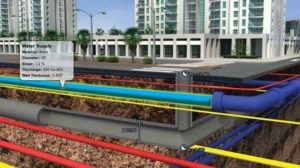 Sivan Design’s 3D-GIS in the Cloud provides decision makers, stakeholders, professionals, and public users with 3D views and 3D analysis tools of spatial information. The application offers information-based decision making tool of urban and rural environments in a Smart 3D City model. 3D-GIS in the Cloud enables real-world views that improve users’ orientation and increase their efficiency in performing their tasks related to city planning, infrastructures, roads, and cadaster management. The application can be accessed by any standard compliant web browser and is also available as an iPad App.

3D-GIS in the Cloud can be purchased in two licensing models – SaaS or On-Premises. SaaS (Software as a Service) licensing model offers affordable subscription packages of the 3D GIS Online service and includes limited users and storage quota. On-Premises license means the application is installed locally within your organization’s local network / intranet.

The application design architecture directs all the complex calculations to be handled at the cloud, and while using proprietary server-side rendering technology, creates a user-optimized 3D environment that is based on the user’s current bandwidth and connectivity status. The optimized 3D environment is then sent to the user as lightweight and easy-to-handle information.

These techniques relieve the client computer or device from the need to handle any processor-demanding tasks and, as a result, the application achieves excellent performance on low-budget computers and tablets such as an iPad.

3D-GIS in the Cloud supports existing GIS spatial data from various files (e.g. Shapefile, GDB, Multipatch, GeoTiff, ECW, GML, SDF, WMF, WFS) and database sources (e.g. ArcSDE, SQL Server, Oracle). Each data source is rendered and handled as an independent layer within the 3D model. Such a layer can represent the existing or built state while another represents an entirely new city plan for example. 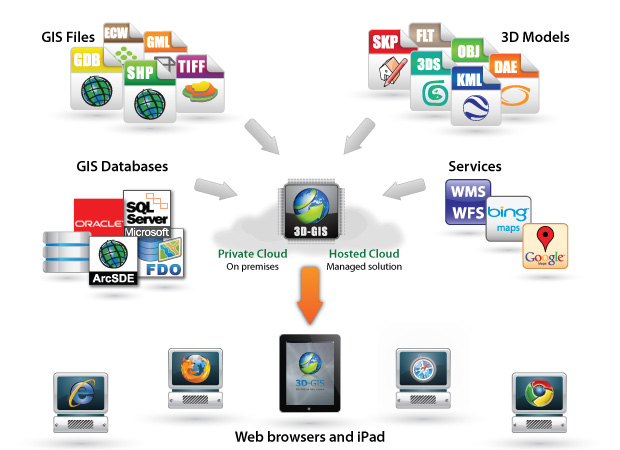 3D-GIS in the Cloud supported data sources and clients

Combined with the available GIS information and metadata, users can conduct comparison analysis and evaluations of different scenarios within and between layers. In addition to conventional 2D features (e.g. Point, Line, Polygon) the 3D-GIS in the Cloud includes additional new features such as 3D buffer, 3D Parcel, Pipeline and more.

“Using 3D-GIS in the Cloud, the concept of Smart/Digital Cities has matured from 3D models that are visually appealing at-most, to accurate and details-rich models that support GIS analysis and data management and as such, became work tool for daily usage”

To liven-up the model and increase its credibility the application uses several techniques while constructing the model. Layers containing realistic 3D SketchUp models of structures or features, either existing or reflect to a projected plan, can be added and positioned in their exact spatial location. Another technique makes the use of images, representing different materials patterns, which are tiled across a 3D feature in order to symbolize the main material the feature is constructed from. In addition, surface information imported from TIN, DEM, etc. can be draped at the top-most level of a structure.

Sivan Design’s 3D-GIS application offers a range of solutions tailored for every need – Roads 3D-GIS, Cadastre 3D-GIS, and Infrastructure 3D-GIS. Each solution offers related information only, thus providing an intuitive and easy to use application.