The Bayelsa State Government signed a Memorandum of Understanding with Sivan Design to develop a world-class computerized system to run its geographic information system, (BGIS) with complementary services including Aerial Mapping.

Speaking, during the MOU signing ceremony at Government House, Yenagoa, Governor Seriake Dickson noted that the project when completed would go a long way in enhancing on-going efforts by his administration to beautify its capital city. Apart from facilitating the growth of critical infrastructure in the state, the Governor maintained that the project will also increase government’s capacity in driving its tax policy.

Governor Dickson, who decried what he describes as undue delay in the issuance of certificates of occupancy (C of O ), pointed out that the Bayelsa Geographic Information System will speed up the process of certifying titles to owners of landed property in the state.

“This project when completed will give us the capacity to turn Yenagoa around from being a slum city to one of the best planned and beautiful and modern cities in this country. This is one of the most important projects the ministry of lands will be executing under my government. It is my belief and expectation that in no distant time, it will be possible in this state for people to go into land transaction and in a matter of days and weeks, not months and years, have their certificate of occupancy”. 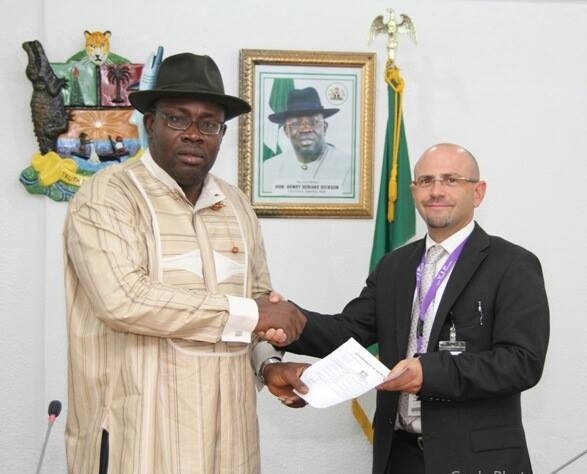 Describing the project as dear to his administration Restoration agenda, Hon. Dickson urged the contractor to execute the project according to specification and deliver it in record time.

In his remarks, the Commissioner for Lands and Survey, Surveyor Furoebi Akene explained that, the system will to a large extent also assist in solving boundary litigation, saying “If you bring a C of O or a land document and we log it in and it is not falling in the proper place, we will be able to point it out and tell you that your survey plan or data capture is faulty”. On his part, Managing Director, Bayelsa Geographic Information Systems, Mr. Odubo Ebifuro described the project as a computer-based data capture, management and retrieval system capable of serving different purposes to drive development in the state.